As you probably assumed, I didn’t really touch him – but I think I got the closest I ever will to touching Winston Churchill. Read on and it will all make some sense 🙂

It was Sunday 5th, and it was time for me to leave what had been my home for the past week, lovely Ashanti Lodge! I had really gotten to know the place, the people there and it would be strange to only spend the weekends there from now on. But the adventure carries on and I was going to gain many many more experiences!

The day starts off with me being picked up by Ed and Heather (his wife), who would be taking me to Broadland’s Farm, located between Somerset West and Gordon’s Bay. We drive for about 1 hour along beautiful roads, past Khayelitsha, the township where Fikalele is located, before we eventually got close. We drove on the most bumpy road I have ever experienced, I’m not quite sure how the car survived, but finally we arrive at Broadland’s – my new home for the next 5 weeks!

The house is one of the oldest colonial houses in South Africa and Pat Cavendish O’Neill has lived here for 44 years. Pat is an 89 year old woman who grew up in an aristocratic English family. She had private airplanes, mansions and villas all over the world, and has all in all lived a life out of the ordinary. She moved to Kenya when she was young (where she raised a lion!!) and from there moved to Cape Town with her mother 44 years ago. Pat is probably one of the most interesting people I have met, so she’s getting her own little post later on! Pat adores animals, so the whole house is filled with cats and dogs and in the outside area you can find geese, ducks, and even peacocks. Her beloved chimpanzee Kalu is just a couple of metres from the pool, in an enclosed grass area.

I got to meet Pat just after I had arrived and we were all going to have lunch together. Out of nowhere, a tan, very fit man walks in with five dogs following him before they all attack me at once. I came to learn that this was Morgan. Morgan used to work as a model one day he just wanted to leave that life behind for a while so he decided to come to Broadland’s farm and help out with animals for six months. That was eight years ago and he now works here at the farm. There we were, Ed, Heather, a 89 year old woman, and myself and suddenly this ex-model comes walking in, I couldn’t quite grasp everything that was going on.

Quite overwhelmed by everything, we sit down and have some lunch prepared by the staff that work for Pat. They serve us at the table and clean up when we finished, I can live with this kind of service for the next five weeks.

After lunch, Heather and Ed take me for a car ride along a beautiful road going down to the end of False Bay. It was GORGEOUS!

The red arrow marks where Broadland’s Farm is located, and we drove down on the yellow road past Gordons Bay and Kogelberg Nature Reserve. 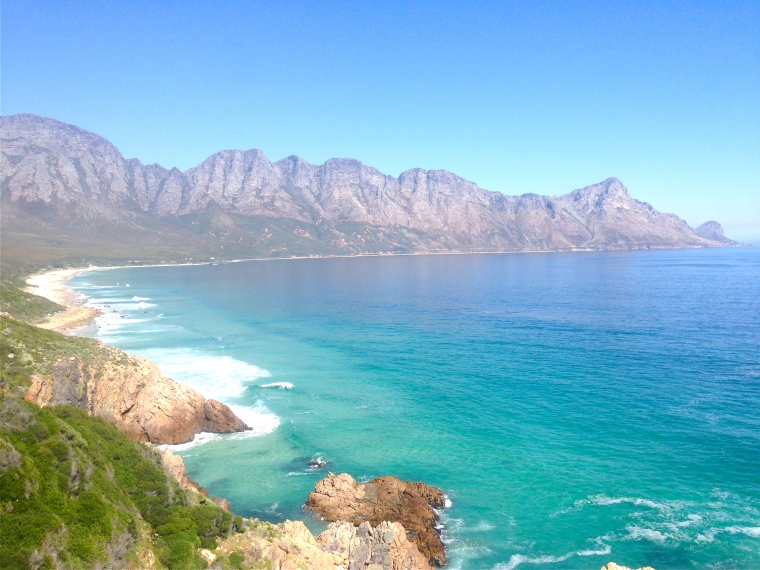 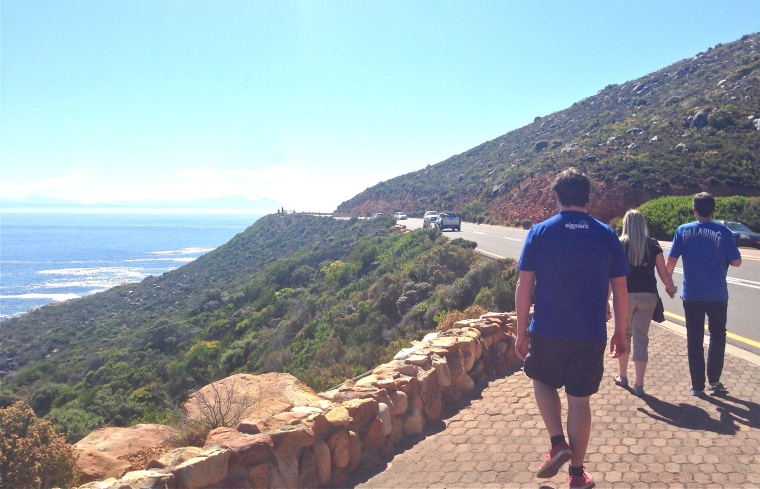 After our little road trip they dropped me off at Broadland’s and I stayed there for the rest of the evening.

Of course I was met by yet a little happening, as there always seems to be something going on at Broadland’s. Pat had a visitor, a woman who had volunteered for Pat 30 years ago. She had brought her husband along and they were having some tea with Pat. The woman had studied to be a vet when she volunteered with baboons at Broadlands. She had carried on to become the best veterinary for camels in the world and someone even wrote a book about her, there was even a movie produced of the book! Her husband was born in Tanzania and was planning on starting an orphanage there now. In fact, he knew about the orphanage that I had been at with my school 2 years ago! Ahh such a small world full of coincidences, it’s just so amazing and hearing stories about what other people have done fascinates me so much! There are so many different kinds of people out there and they always have something to bring to the table. Some people though, have so so much to share – Pat is definitely one of these people! Haha, I must be in a bit of a shock after everything that happened today.

Pat and I had supper (we’re very British around here) at 5:45. Yes, Pat is very punctual, so breakfast is at 8:00, lunch (which is the main course) is at 12:30 and supper at 5:45. So there I was sitting with this 89 year old woman who has done this, done that. We’re having a small supper together while male peacocks have spread their ‘wings’ to show off to the females, a Great Dane is resting in Pat’s lap and we’re talking about Morgan, the guy who has lived on her farm for 8 years. Suddenly Mrs. 89 year old says, “I’m actually not too sure what he does for his sex life!” – I think my life just completed itself, Haha! Of course, it doesn’t stop there, as Pat is telling me a bit about this and that, she casually adds that Winston Churchill was a good friend of the family, especially her brother Caryll (Lord Waterpark), and so because Caryll’s clothes are in the same cupboard as where I’m keeping mine, I like to think that I have now officially touched Winston Churchill.

The view from the dinner table

So that’s the story (it got quite long), but just a lot going on with this and that!