Hello again, long time no “see”, but I am back on the interweb for about 30 minutes 🙂

I am all settled in at Broadland’s Farm and getting to know my host Pat and yesterday I had my first day at Fikalele, but you will get more information on all my days in the upcoming posts which will probably come this weekend! I’ve been experiencing a lot of amazing things the past couple of days so I’ll just keep doing day by day posts, hoping that will entertain you enough!

So to continue from where I left off: Day 7 (Saturday 4th October). Irene, Vilde, Rita, Camilla and I went kayaking!

We were picked up from Ashanti at 8 and were taken for a 15 minute taxi ride to get to a place called Three Anchor Bay. We found the kayak shop, a strange little place next to a very dodgy Shell station, but we were met by a smiling lady who welcomed us with warm hands. We waited for a group of 15 other people to arrive before we were instructed on what to do.

After we were given very sexy vests and “aprons” which prevent the water from getting into the kayak, we had to find a partner because we were going to be paddling in 2-man kayaks. Since we were five girls and the other four girls were together, I had to wobble around in my very sexy gear trying to find a partner. A really nice guy approached me who was alone too so we paired up, and before we know it, we were floating on the water.

The sun was high in the sky, not a cloud to be seen and it was a bit like being in paradise. I was having the time of my life.

Table Mountain in the background

We paddle, paddle, paddle and paddle a bit more and my arms are starting to feel the paddling, but life was pretty great right then. I was talking a lot with Mr. Kayak partner (he had quite a complicated name I can’t remember), who was such an amazingly interesting person! He was an American-Armenian, but had been brought up in Swaziland (a small country within South Africa for those who need some help with your geography). He had moved to Swaziland because his parents had decided to start a hospital there and he attended an international school there (we bonded over this subject). He even had family in Luxembourg! There I was, in the middle of an ocean in South Africa, getting to know a really interesting guy who has family in Luxembourg!! He even offered me to have a placement at his parents hospital. Well as you can imagine, I was having the time of my life! 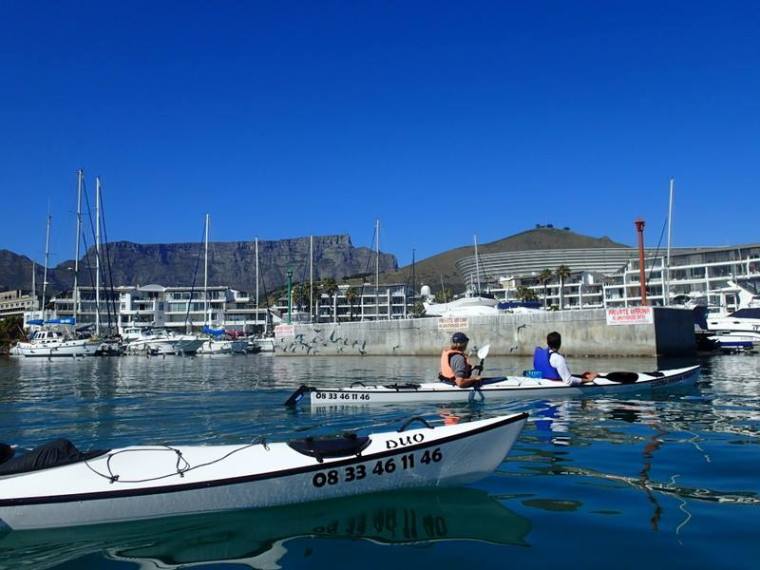 After having paddled for about 2 hours, first of all my arms were in a very high amount of pain, but we still hadn’t seen any wildlife and I was a bit disappointed. But then…. 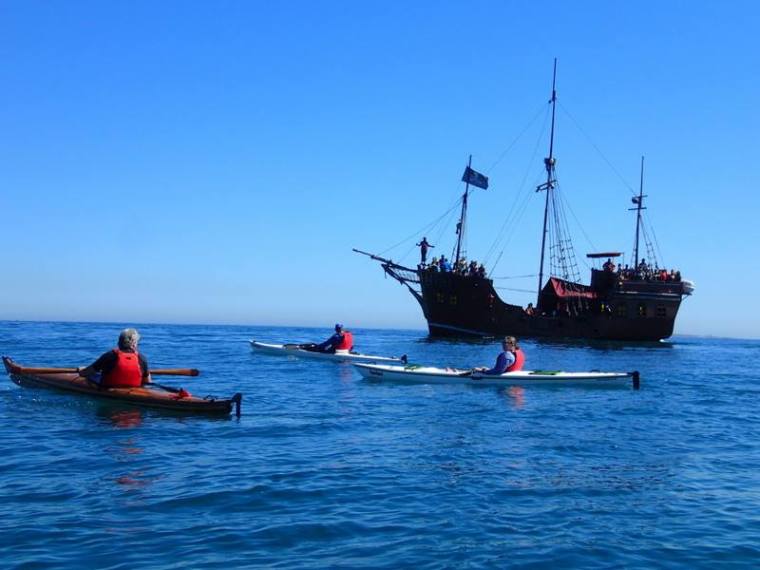 We were attacked by pirates! Haha, not exactly, it’s just a tourist boat that takes tourists on a tour with the staff dressed as pirates.

What actually happened is that we hear someone who shouts “Whale, whale! Come over here” (‘here’ being quite far away). But my muscles must have heard what they said because they regained all their strength and Mr. Kayak partner and I paddled all we could ‘over here’. Everyone was waiting patiently in their kayaks when suddenly A HUGE WHALE COMES OUT OF THE WATER! Yes, a whale! It was at the most 7 metres to the left of my kayak! A whale was 7 metres away from my kayak; yes I am still in a bit of a state of shock and I can’t really believed it happened.

We weren’t allowed to bring any electronics on the trip so the woman who came with us took all the pictures, but somehow didn’t get a single picture of the whale, so I had to steal a picture of the internet, but this is the whale we saw! It was about 8 metres long (but seemed way bigger!)

The whale is specifically called a Brydes whale

I freak out for a bit while Mr. Kayak Partner wants to go even closer, so we paddle around and the whale kept coming out of the water several times all around everyone’s kayak!

It must be one of my top 10 experiences I’ve ever had. After about 15 minutes of whale watching, we paddled back to shore and Anna was very very pleased with the kayak trip!

After our amazing whale experience, the Norwegian girls and I went for a nice walk along Beach Road, feeling as if we were in Miami with such amazing weather and palm trees along the pavement – Cape Town keeps surprising me in great ways!

We had lunch at the V&A waterfront before heading home and having a relaxing evening!

What a day it had been!